Posted on September 8, 2011 by Charles Davis 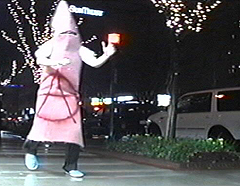 “[I]f you’ve got a clergyperson preaching anarchy, do you really think the police department shouldn’t try to send somebody and listen and see if they’re trying to foment a riot? You can’t wait till the riot’s on the streets.”
— New York City Mayor Michael Bloomberg
Update: Turns out that, according to The New York Times, there at least used to be “Sunday Schools That Teach Children Anarchy” (exclamation point implied).

A writer and producer with whose work has aired on television and radio and been published by outlets such as Al Jazeera, The Intercept, The Nation and The New Republic.
View all posts by Charles Davis →
This entry was posted in Anarchism. Bookmark the permalink.