Posted on January 11, 2011 by Charles Davis
As a sensible, mainstream liberal Democrat, “progressive blogger/activist” Howie Klein must of course view every tragedy through a strictly partisan lens. So, naturally, he knows, damn it, that Sarah Palin is directly responsible for the massacre in Arizona carried out by the crazed Jared Loughner. Indeed, like other good partisans, he knew it before the bodies in Tuscon were even cold (just as he knew Loughner must be a Ron Paul devotee — you know, that crazy Texan who opposes all those humanitarian wars carried out by our liberal, Nobel Peace Prize-winning president).
This being the glorious age of social media, Klein, like other painfully plugged-in progressives sickened by violent political rhetoric — but not so much by violent acts embraced by their favorite politicians — took to Twitter to snarkily pronounce his verdict, with a series of 140 character insights like this one: 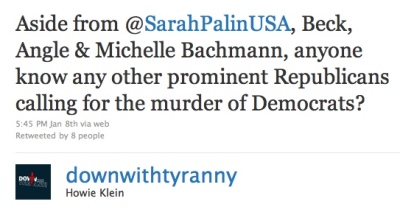 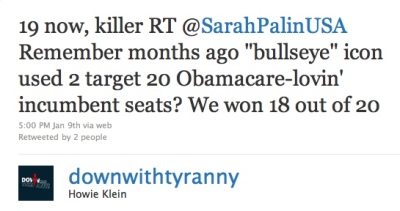 So, one must wonder, how completely unaware, how absolutely devoid of self-consciousness, must one be to write things like the above — accusing one’s political foes of inciting their followers to commit murder through the power of hyperbolic rhetoric — while seeing nothing unseemly about posting something like this? 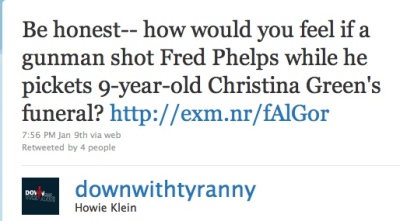 A writer and producer with whose work has aired on television and radio and been published by outlets such as Al Jazeera, The Intercept, The Nation and The New Republic.
View all posts by Charles Davis →
This entry was posted in Liberalism, Sarah Palin. Bookmark the permalink.